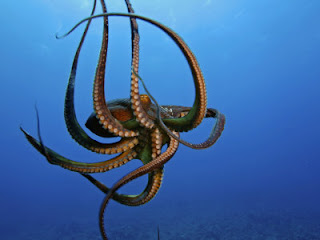 1. n. Octopus (Polypus sp.), commonly known as squid
2. To slide, surf, slip, flee (Kin. 14.10).
3. To melt, flow, drip, soften; to skim, as milk.
4. To hang down, as fruit; to sag; to beat bearfruit.
5. Line that supports the mast, stay.
We refer to heʻe as squid in Hawaiʻi, but the true squid is a mūheʻe. I suppose, though, as long as everyone here in Hawaiʻi knows what is meant when we say squid though we mean octopus. I guess it doesnʻt matter, right? Heʻe is octopus. Heʻe also means to slide or slip. The name Waiheʻe can translate "slippery water". Heʻe also means to melt - ua heʻe ke hau - the ice melted.
As a point of interest, the head if the heʻe is known in Hawaiian as a pū, and not "poʻo" which is the general term for head, like the one on top of our necks. The tentacles of heʻe are known as ʻaweʻawe and not wāwae, or legs, as we have on our bodies.
Interesting to note that "wahaheʻe" or "slippery mouth" refers to someone who lies. Here is one of my favorite ʻōlelo noʻeau: He waha kou o ka heʻe - Yours is the mouth of an octopus (in other words, you are a LIAR!)
Here are a couple more ʻōlelo noʻeau that refer to the heʻe of the sea:
Ka iʻa pipili i ka lima - the fish that sticks to the hand. This refers to the way the tentacles with their suction cups stick and slide over your hand.
Pua ke kō, kū mai ka heʻe - When the sugar cane flowers, the heʻe season is here.
Before the heʻe can be eaten, raw or cooked, it is always a good practice to pound it and rub it with salt to remove the wale (slime). The pounding also helps to soften up or tenderize the meat. Today, people usually put a papaya leaf or two in the bottom of the bucket before pounding because the papaya contains a tenderizer. Just add some Hawaiian salt and hold onto the pū and pound away until the ʻaweʻawe start to curl! My mouth is already starting to water! Heʻe maka, or raw squid, is my favorite of all the raw foods to eat. And it tastes best when the ʻalaʻala or the ink sac of the heʻe is used as a part of the ingredients mixed in, along with ʻinamona, or kukui nut relish. ʻOno!
Posted by Liana at 5:06 PM