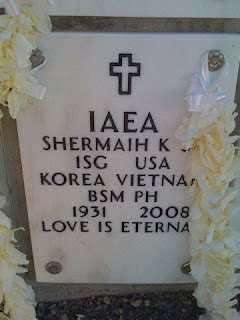 Today's He Momi is dedicated to the men and women who have served their country and continue to serve defending our freedom and sacrificing their lives. It is no mistake that the Hawaiian word for soldier is synomymous with the word for bravery and courage. Koa. That is what it takes to be in the Armed Forces. To be willing to travel to faraway places, putting their lives on the line. It amazes me. Every. Single. Day. And it doesn't surprise me that the koa tree is a symbol of strength, is a strong hardy wood that was used extensively by Hawaiians and used for lei in hula, transformed into a garland of beauty but also signifying strength.

Mahalo nui to all the koa and especially to my dad, Shermaih Kahuakai Iaea, Jr., who retired from the U.S. Army. He was proud of his service, he was active in his local chapter of the Veterans of Foreign Wars, and he cherished his medals and letters of commendation.