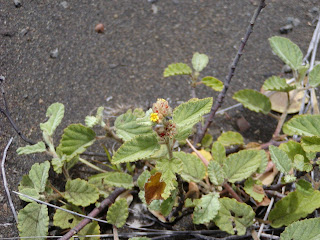 
You know someone once told me that a weed is just a plant whose true worth has not yet been discovered.  I think 'uhaloa is one of these "weeds."  Many people don't know the power that this little plant has to cure!  And it's plentiful.  We see it a lot but don't really know what it is when we see it.
'Uhaloa is used, among other things, as a remedy for sore throat.  A tea can be made from the root or you can simply chew the root slowly.  It is one of the plant forms of Kamapua'a, the pig god.  Other names include 'ala'alapūloa, hala 'uhaloa, hi'aloa, and kanakaloa.

Aia i kula i ka 'ala'alapūloa
Gone on the plain to gather 'ala'alapūloa
(Gone on a wild goose chase.  A play on the word 'ala'ala [octopus liver], meaning nothing worthwhile)

Mai hilahila! Don't be shy to leave a comment here! People leave me comments on my posts on Facebook and Twitter but are experiencing bouts of shyness here on the blog! But the beauty of the blog is the interactivity allowed with comments! Bring it on.