1. Community, neighborhood, village. ʻOia nō kekahi o nā kānaka waiwai nui a kūʻonoʻono ma iā mau kaiāulu, he was one of the wealthiest and most prosperous persons of these communities.
2. (Cap.) Name of a pleasant, gentle trade-wind breeze, famous in song, at Wai-ʻanae, Oʻahu. ʻOluʻolu i ka pā a ke Kaiāulu (song), cool with the touch of the Kaiāulu. Also Pua-kaiāulu.

Todayʻs He Momi is dedicated to my kaikamahine hānau ʻelua, my second born daughter, Kika. Her Hawaiian name is Kīkahakamanuikekaiāulu - the bird soars in the Waiʻanae wind, so named because at the time of her birth we were living in Waiʻanae.  And despite the fact that we moved out of Waiʻanae when Kika was still in elementary school, she still has a deep fondness for the area (as we all do). In fact, her first job after graduating from UHM with her MSW was in Waiʻanae!

For us, Kaiāulu refers to the wind of Waiʻanae, a pleasing wind, as any wind on that coast is welcomed! The song, Aloha ʻia ʻo Waiʻanae, has the line: Pā ana ka makani ke Kaiāulu, he aheahe mālie - the kaiāulu wind blows, a gentle breeze. 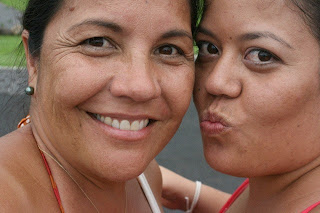