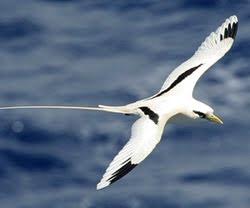 1.  The tropic or boatswain bird, particularly the white-tailed tropic bird which inhabits cliffs of the high islands.
2.  a variety of banana.
3.  A variety of taro.
4.  A snapper, probably onaga.
5. A variety of sweet potato.

You will find other birds which may have a counterpart, either in the ocean or on land.  Koaʻe is just one fine example.  I saw many koaʻe flying in Borabora when I went there a few years ago.  They are a beautiful, sleek bird. There are koaʻe kea (white koa'e) and koaʻe ʻula (red-tailed).   I am particularly fond of the koaʻe because the Hāmākua coast of Hawai'i island is known poetically as ka pali lele koaʻe, or the cliff where tropic birds fly.

He koaʻe, manu o ka pali kahakō - It is the koaʻe, bird of the sheer cliffs (An expression of admiration for an outstanding person.  The koa'e build their nests on cliffs.)

sign up, on the right hand sidebar,  to follow this blog and don't forget, comments are always welcomed.
Posted by Liana at 9:41 AM